Tax Alert: Plan Now For The Demise Of Stretch IRAs

Say goodbye to the stretch IRA! That's the message from Congress, where a pending bill with bipartisan support would deep-six this tax-advantaged practice. Stretch IRAs have been a boon to non-spouse beneficiaries who inherit a retirement account because they can extend the period of tax-free growth on an inherited IRA over their expected lifetime.

Under current rules, for purposes of illustration, assume a father dies and bequeaths his 40-year-old daughter his individual retirement account. The tax code requires that she takes distributions out of the account every year. But she can extend that to over her actuarially expected lifespan codified in a table published by the IRS. 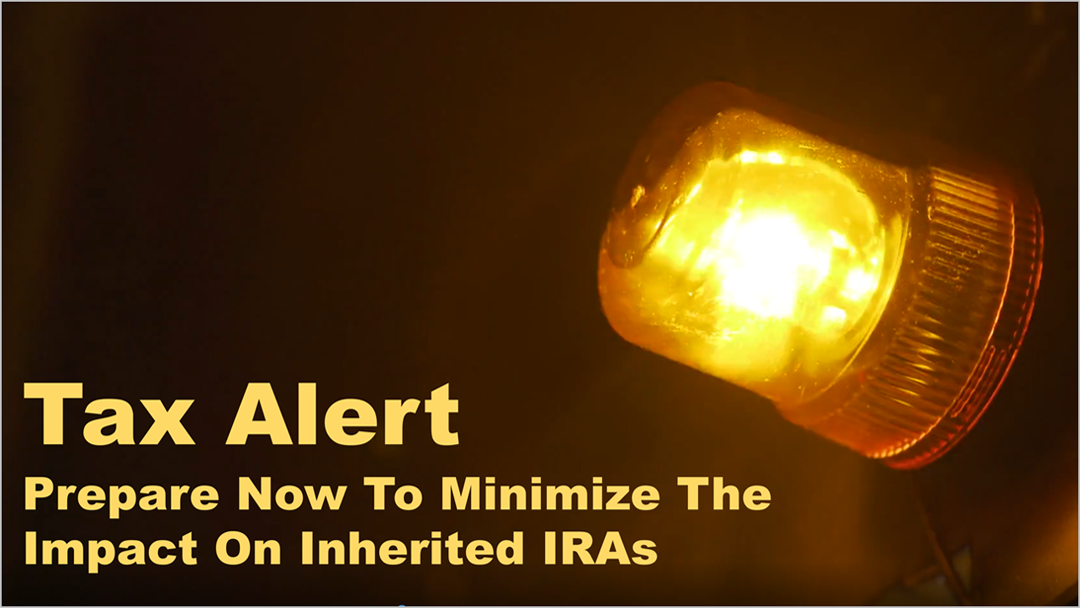 An heir can expect to live to 95, according to actuarial tables. That means a 40-year-old female heir can avoid taking the money all at once in a lump sum — and won't have to pay the IRS a big chunk of it. Instead, you can withdraw just 1/55th of the IRA amount annually, which obviously is less money than the whole of it, but also has less of a tax bite. Meanwhile, by extending the payout period, the account can grow in value over the decades, giving you more money than the sum you inherited.

Congress, however, is intent on ending this good thing. The legislation, called the Setting Every Community Up for Retirement Enhancement Act, or SECURE, passed the House of Representatives by a whopping 417 to 3. A similar version is pending in the Senate.


The law contains provisions that would be beneficial to many retirees, such as delaying required minimum distributions (RMDs) from your tax-deferred retirement plan or IRA to age 72 instead of 70½. Deferring taxes 18 more months when your account is near its all peak value is a nice boost for you, owing to the law that is widely expected to be passed by the end of 2019.


Under the House bill, a beneficiary must deplete an inherited IRA within 10 years of the owner's death. (Inheriting spouses get the money tax-free and with no RMD.) While the Senate proposal permits a lifetime stretch of the deferral on the first $450,000 of an inherited IRA, the balance is required to be withdrawn in five years. The appeal to lawmakers of squelching the stretch IRA: it would raise $15.7 billion in Government revenue over the decade through 2029.

There are ways, though, to set up an inheritance to replicate a stretch IRA. A parent or other IRA owner, who wants to pass along the money with less tax depletion and more flexibility, would want to weigh the following strategies to maximize your impact on the next generation:


Convert the IRA to a Roth. Before an IRA holder passes, it might be wise to convert the account to a Roth. The giver will have to pay taxes on the money up front. But a Roth requires no minimum distributions annually; your heirs will owe the IRS zilch and can withdraw at his or her own schedule.

Insure payment of the conversion tax. One way to pay the Roth conversion taxes is to take out a life insurance policy on the donor — the proceeds from which are tax-free. At the IRA donor's death, the policy's proceeds pay the taxes for the Roth conversion. Otherwise, the up-front taxes may (and often do) come from the IRA itself, thus shrinking it. An insurance product's cost must be considered as well as the creditworthiness of the insurer.

Set up an irrevocable trust with a life insurance policy. This is a variant on the previous strategy. Here, the donor takes a distribution from the IRA long before death and uses the money to fund the trust. The trust is called "irrevocable" because the terms of the trust can't be altered without the approval of its beneficiaries. Although the trust can't grow tax-free, like a stretch IRA, its distribution is also at the discretion of the recipient.

Create a charitable remainder trust. For those of a philanthropic bent, this arrangement serves a double purpose. At death, the IRA owner funds the trust, which pays the beneficiary for a specified period or for the person's lifetime. The trust establishes a set amount or percentage that goes to the inheritor. (The estate receives a charitable deduction for the gift.) The other big win: what's left over goes to a designated charity.

Implementing these tax strategies requires the advice of an experienced tax professional, who understands your personal situation. This article is not tax or legal advice, but it is an alert to IRA owners and their beneficiaries to watch the proposal now wending its way through Congress and prepare to act on a strategy. U.S. tax laws historically are usually not signed until the end of the year but waiting on this tax reform to be signed may not leave you enough time to formulate the best strategy for minimizing taxes owed on an inherited IRA under the SECURE Act and optimizing your impact on the next generation of your family. Please contact us with questions.